Pleated Genius: A Celebration of the life and work of Issey Miyake

Earlier this year, the world learned of Issey Miyake’s passing. A name that has now become a byword for cutting-edge fashion, Miyake and his eponymous label have been internationally admired for their statement-making and functionally-thoughtful clothing. I deliberately use the word “clothing” here in tribute to the late designer who is often quoted saying, “I don’t make fashion. I make clothes.” Humble and ingenious, as many of his peers have described him, Issey Miyake stands out from other high fashion designers as something of a maverick who ironically didn’t care all that much for fashion. Anything that was in fashion, to him, would inevitably go out of style. Instead, he hoped his creations would represent something more permanent. Famously referred to as “clothes for living”, Miyake’s designs reveal a key trait of the designer: he was a celebrator of life. Through design, passion, and appreciation for the human form, Miyake dedicated his life to spreading the joy and privilege of living.

This path might have been a result of an early childhood memory. Miyake was only seven years old when he watched the destruction of Hiroshima by the atomic bomb in 1945. His own mother died of radiation poisoning three years later, but it wasn’t until more recently that Miyake was ready to open up about the experience. Sharing his wartime reflections for the first time with The New York Times in 2009, he expressed that the event led him to “firmly believe in life’s preciousness”. Miyake became fascinated with fashion because he viewed it as an art form that was optimistic and modern. It allowed him to think of things that can be created rather than destroyed, and it was something that he believed could bring beauty and joy to the world.

Miyake had set up his label 50 years before his death, and it has remained a widely beloved brand. His clothes were everything: elegant, rebellious, modern, traditional, functional, artistic, genderless, ageless, for the daytime and the night. They dressed everyone, from workers on the factory floor of Japanese tech giant Sony to celebrities on the red carpet. But Miyake is probably best known for his cutting-edge, sculptural, pleated garments. Constantly fusing art and fashion, the designer also brought in innovations from the tech world. During the 1980s, he experimented with using a heat press to shrink clothes into desired shapes, sizes, and textures. This method allowed finished garments to be washed and air-dried without losing their designated structure. The technique became the foundation of the wildly popular Pleats Please Issey Miyake line, which he launched in 1993. 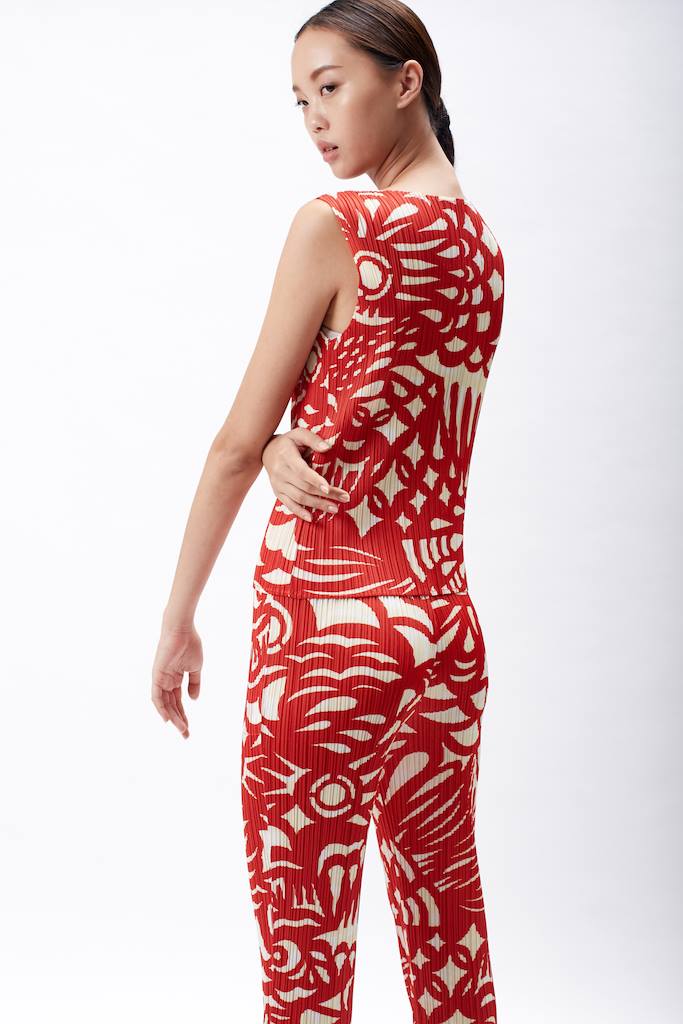 Whilst uniquely striking and statement-making, Miyake’s pieces were always thoughtful to the wearer, with a focus on functionality—a rare observance in high fashion. Never taking life for granted, Miyake saw no time for the superficial nor for status-flaunting and physical restrictions. For this reason, most Miyake pieces have no buttons, zippers, or snaps. There are no tight armholes or delineated waistlines. Necklines are never so deep as to be revealing. The clothes are also creaseproof, making them great for travelling, and can be washed in a washing machine without worry of deformity. Merging Eastern and Western traditions into his work and transcending them altogether, Miyake found fans all over the world. Steve Jobs, Apple founder and fellow follower of things that marry form and function, famously owned a hundred black Issey Miyake turtlenecks.

But whilst it is certainly true that Miyake was internationally revered, it is also clear to see that he occupied an extra special place in the hearts of Thais. With more stores in Bangkok than in most Western cities, Issey Miyake is one of the best-selling designer brands among Thais. His pieces are viewed as far more than just clothes, easily penetrating into the territory of collectible art—that happens to be wearable. Our affinity for Issey Miyake is so strong that Homme Plisse, Issey Miyake’s menswear line, even released a collection exclusive to Bangkok. The “Block Series” was a collection of tops and bottoms in sharp, contrasting block colours, which wearers were encouraged to mix and match as they pleased. The contrasting combinations were a tribute to the colourfulness of Bangkok, evoking the architecture, shop signs, food packaging, and dynamic yet laidback vibe of our city.

In many ways, our special relationship with Issey Miyake doesn’t come as a surprise. The brand’s clothes are some of the only by foreign designer labels that are truly suitable for Thai climate. Often using kimono silk as the primary material, Miyake’s garments offer a lightweight breeziness that keeps their wearers cool in the heat. The silk material brings another sense of comfort through cultural familiarity, being reminiscent of our own traditional fabrics and clothing style. Japan is also the most visited country by Thais, most likely owing to our appreciation for their culture of quality. Issey Miyake resembles all the aspects of Japanese culture that Thais look up to: being advanced with a retained respect for tradition and putting heart and care into everything that you do. These are valuable traits in the modern fashion industry, making the loss of the designer all the more deeply felt.

Not many know this but Miyake initially aspired to become a dancer. He had always strongly perceived a connection between movement and the enjoyment of life. It’s no surprise then that his “clothes for living” were designed for movement. Iconic pieces such as his “flying saucer” dress have been hallowed in museums as important representations of celebrating human freedom. This particular dress features tiers of micro-pleated ruffles that seem to defy gravity while orbiting the wearer. Miyake’s clothes are also often modelled in highly dynamic and energetic ways, with shows featuring dancers or, in the case of Paris 2020, skateboarding models.

It seems to me that to wear a Miyake piece is to be in on a valuable life secret: that you are a free being. His clothes are a celebration of this fact, reminding you to move and dance; to be different, creative, and open-minded; to embrace your heritage, appreciate the little things, and to never take life for granted. His clothes give us a form of freedom and an encouragement to celebrate life and just be.