It’s a casual Saturday at the Harnharuiharn twins’ residence and because of the unavoidable work-from-home situation, we have agreed on a virtual catch-up. Chupat (known as Pong) offers an upbeat hello with their dog Khai Dtom lazing on his lap, while Chatpong (Pun) is busy grilling duck in the kitchen—topless. We’re not complaining at all.

You may remember Pong and Pun from their appearance on The Face Thailand, which debuted their modelling careers. They admit that showbiz wasn’t all sunshine and rainbows but they eventually found their calling: competitive eating and the world of YouTube. Modestly launching their food-focused channel, TheFadd, mid-2019 the 25-year-olds were presented the Silver Creator Award (recognition for reaching 100,000 subscribers) in just a few months. To date, the channel has over 700,000 subscribers and has clocked in at least 100 million views. 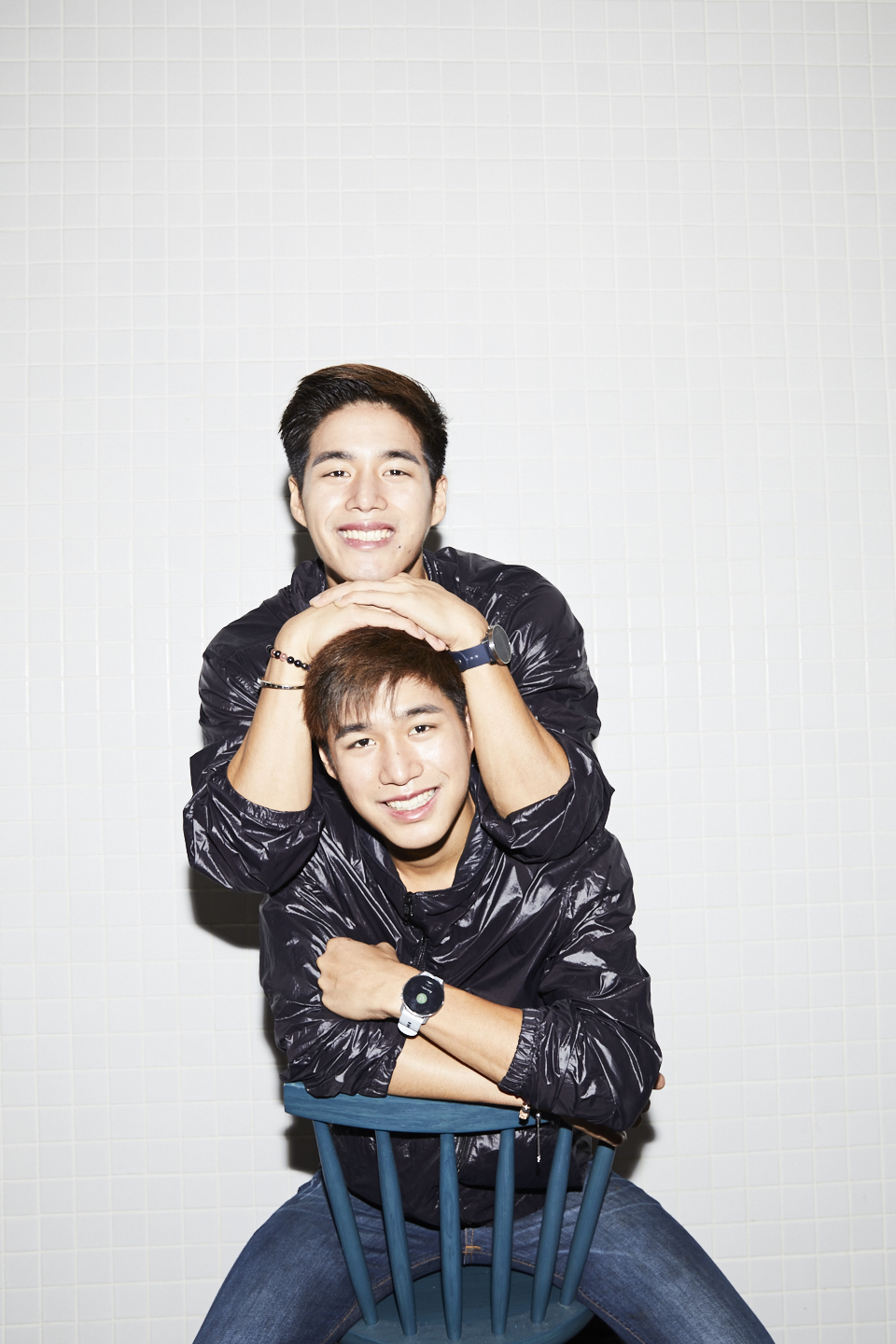 So, how did it all start?

Pong: We dabbled in the entertainment industry for a while but things weren’t as smooth-sailing as we had hoped. So, we took a shot at YouTube videos. Food has always been our comfort zone and it felt almost effortless for us. Both Pun and I started off doing everything ourselves, from filming to editing. We chose restaurants that were out-of-the-box, including places that served giant portions. The feedback was encouraging and we felt that our big appetites made us unique. Next thing we knew, TheFadd became a full-time commitment.

Pun: We’re lucky that there aren’t many Thai competitive eaters out there. It was also the right timing for us. When we launched our channel there was a television show called Thailand Food Fighter, which we got the chance to compete on. Well-known YouTuber and professional competitive eater Peach—known as Peach Eat Laek to his followers—also invited us to appear on his channel.

What keeps fans watching your videos?

Pong: I guess it’s our large appetite first, then the fact that we are decent-looking identical twins [laughs]. People also tell us that they like how we review small, local restaurants and that we are courteous in our videos.

Which are your favourite videos on your YouTube channel?

Pun: We both really enjoyed doing the ones where we challenged ourselves to finishing six kilos of curry rice and a six-and-a-half kilo burger. Disclaimer: Those were not fan favourites but we had a lot of fun filming them.

Give us one competitive eating tip.

Pong: There’s really no secret: practice makes perfect! In the beginning, it was undeniably difficult for us to finish giant portions in one sitting, but it got easier with time.

Is there anything you guys don’t eat?

Pun: No, but we actually dislike certain fruits! There were a few episodes where we had to shake off our prejudices [laughs].

Asking for the fans—how do you guys keep in such good shape with so much eating?

Pong: Just like some people drink coffee every morning, we work out. Our routine usually consists of around 30 minutes of running followed by some weight training.

How do people tell you apart?

Pong: Our friends and family tell us apart from the back! But for beginners, I have a mole on my nose and Pun has one below his mouth. If you look carefully, I have a rounder face and Pun has a slightly larger build. The doctor actually didn’t realise we were twins until quite late in our mother’s pregnancy as her belly became exceptionally big. I’m older than Pun by around a minute.

What are some of the worst misconceptions about twins?

Pong: Some people think twins can guess what’s on each other’s minds. We know each other very well but that’s absurd. Another common misconception is that if one falls ill, the other will too. That’s just what happens when you’re kids and you share a bedroom... like any siblings. 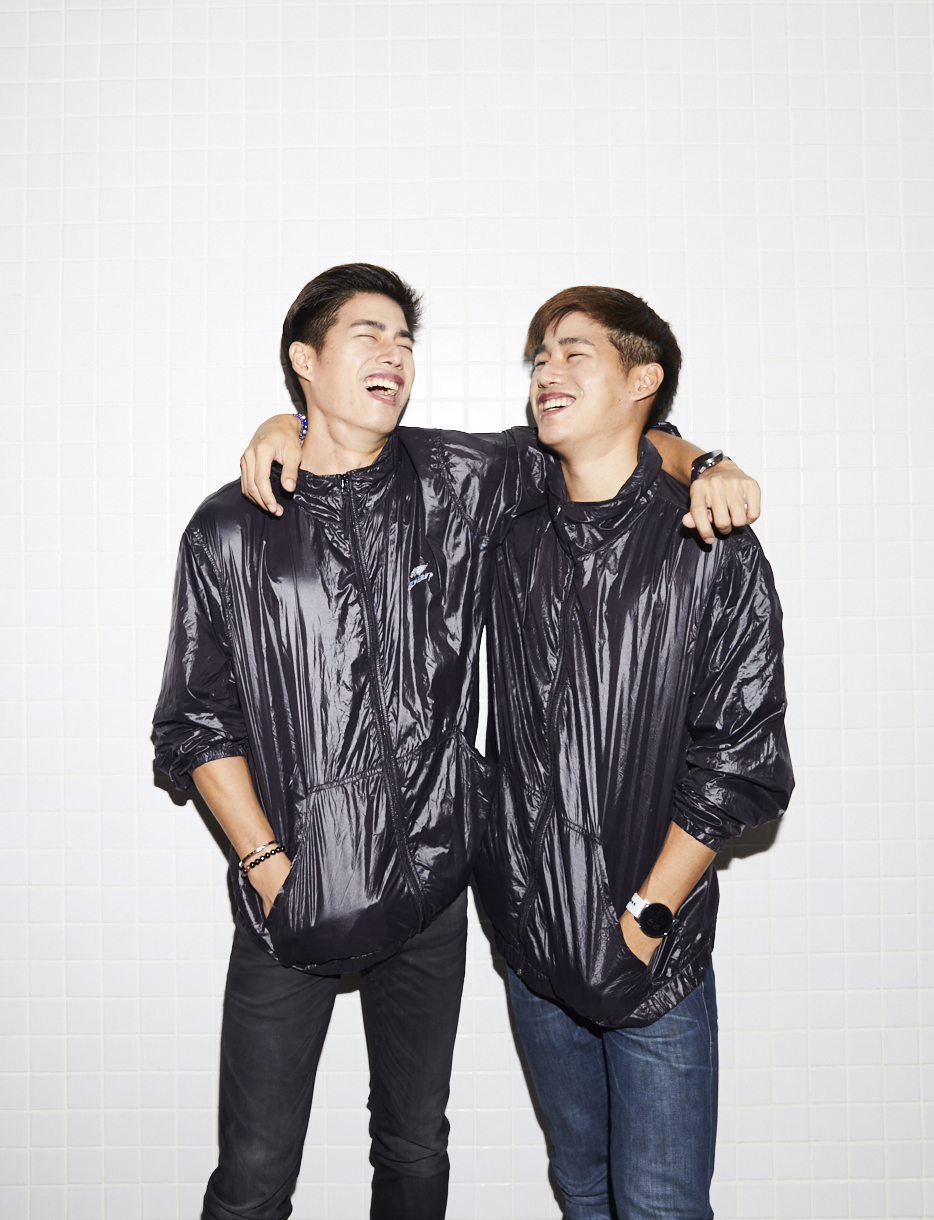 What do you like and dislike about being twins?

Pong: It’s more than just having a sibling. We make our lives easier by being there for each other. For example, we always have a workout buddy and grocery shopping is really fast.

Pun: It’s oddly cool to have someone who looks (almost)exactly like you but then again, constantly being compared can become irritating.

Pong: We both love exercising and cooking. We’ve also always had the same group of friends and both studied engineering at Kasetsart University.

Fast-forward to 10 years from now, what are you guys doing?

Pun: If people are still enjoying our videos then we will still be on YouTube and still be producing content for our Facebook and Instagram accounts. We will also very likely venture into something else, perhaps a bricks-and-mortar food-related business—it has always been a shared dream to open our own restaurant.

What’s your take on modern-day success?

Pong: Success is all about being able to make a happy living doing something you love. It’s mind-blowing that people are now making huge sums of money from their obsession with gaming. In this day and age, parents really need to be more open-minded and support their children exploring what they are passionate about. The world has evolved and the opportunities have become boundless.

Have your parents always given you complete freedom to make your career choices?

Pun: Not at first. They complained a lot in the beginning. And while they were ultimately supportive of our endeavours—they gifted us our first camera—it took them a while to be less worried about us. Eventually we proved to them that we were serious about this creative path we’ve chosen and they started to see the fruits of our efforts.

What accomplishment are you most proud of?

Pong: We’re incredibly proud of getting to a point where our YouTube channel has enabled us to provide for our family. It’s also most heartwarming to learn how our videos have positively impacted small restaurants, as well as street food vendors. You will see that a lot of our content is of us appearing at venues unannounced. Sometimes the owners don’t even know who we are.

What are your upcoming plans?

Pun: We want competitive eating to be taken more seriously. Once the pandemic situation looks better, we would like to travel abroad to do challenges at restaurants known to have hosted other competitive eaters.

Pong: Our goal as TheFadd is to put competitive eating on the map in Thailand. The future definitely looks tasty.

On An Evening In Clara…

Where to Get Vegan Sushi in Town

On An Evening In Clara…

Where to Get Vegan Sushi in Town